Furtherfield 2018 editorial – Introducing a season of exploratory and critical art and blockchain essays, interviews and events.

The blockchain is an evocative concept, but progress in ideas of cryptographic decentralisation didn’t stop in 2008. It’s helpful for artists to get a sense of the plasticity of new technical media. So first we are pleased to share with you Blockchain Geometries a guide by Rob Myers to the proliferation of blockchain forms, ideas and their practical and imaginative implications.

In Moods of Identification Emily Rosamond writes her response to our second DAOWO workshop, Identity Trouble (on the blockchain). She reflects on both ongoing attempts to reliably verify identity, and continuing counter-efforts to evade such verifications.

Mat Dryhurst and Holly Herndon speak here with Marc Garrett in an interview republished from our book with Torque Editions Artists Re:Thinking the Blockchain (2017). Mat and Holly convey a sense of excitement about developments and opportunities for new forms of decentralised collaboration in music.

Finally you can book your place on future events at the DAOWO blockchain laboratory and debate series for reinventing the arts.[note] DAOWO is inspired by a paper written by artist, hacker and writer Rob Myers called DAOWO – Decentralised Autonomous Organisation With Others.[/note] Download the DAOWO Resource #1 for key learnings, summaries of presentations, quotes, photographs, visualisations, stories and links to videos, audio recordings and much more from our first two events about developments in the arts and the trouble with Identity. 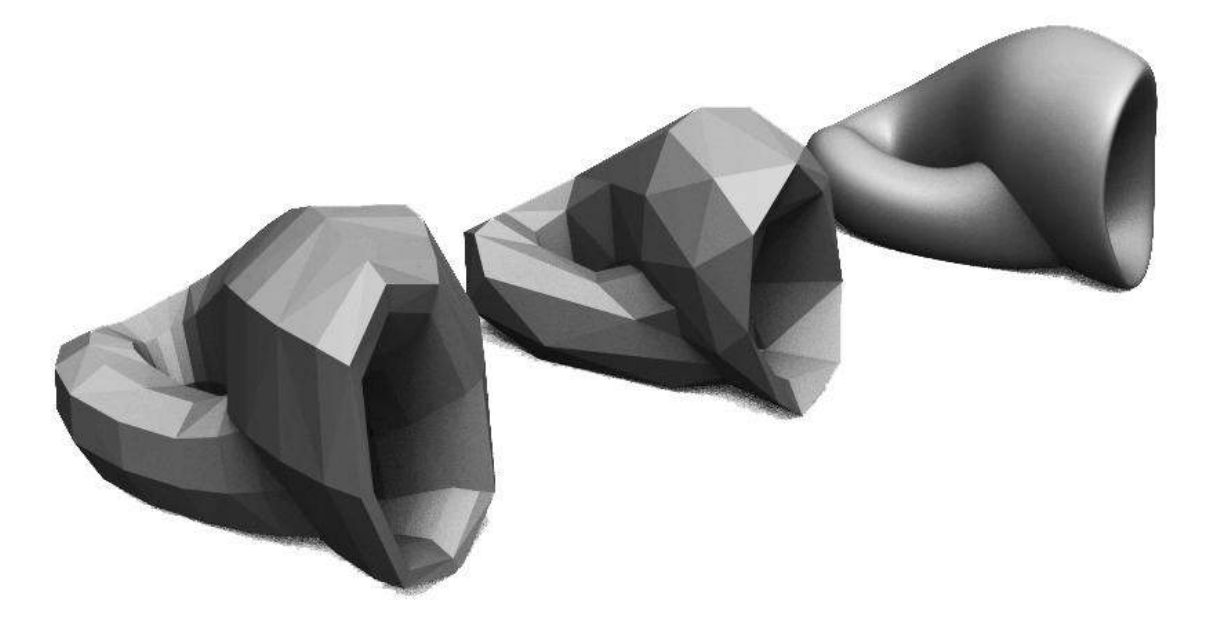 The blockchain is 10 years old and is surrounded with a hype hardly seen since the arrival of the Web. We’d like to see more variety in the imaginaries that underpin blockchains and the backgrounds of the people involved because technologies develop to reflect the values, outlooks and interests of those that build them.

Artists have worked with digital communication infrastructures for as long as they have been in existence, consciously crafting particular social relations with their platforms or artwares. They are also now widely at work in the creation of blockchain-native critical artworks like Clickmine by Sarah Friend[note]The 2017 Furtherfield and NEoN commission as part of the State Machines EU cooperation programme[/note] and Breath (BRH) by Max Dovey, Julian Oliver’s cryptocurrency climate-change artwork, Harvest (see featured image) and 2CE6… by Lars Holdhus[note]Featured as part of Øx, an exhibition of cryptographic artwork curated by Sam Hart as part of the Ethereal Summit, NYC. 2017[/note], to name but a few. 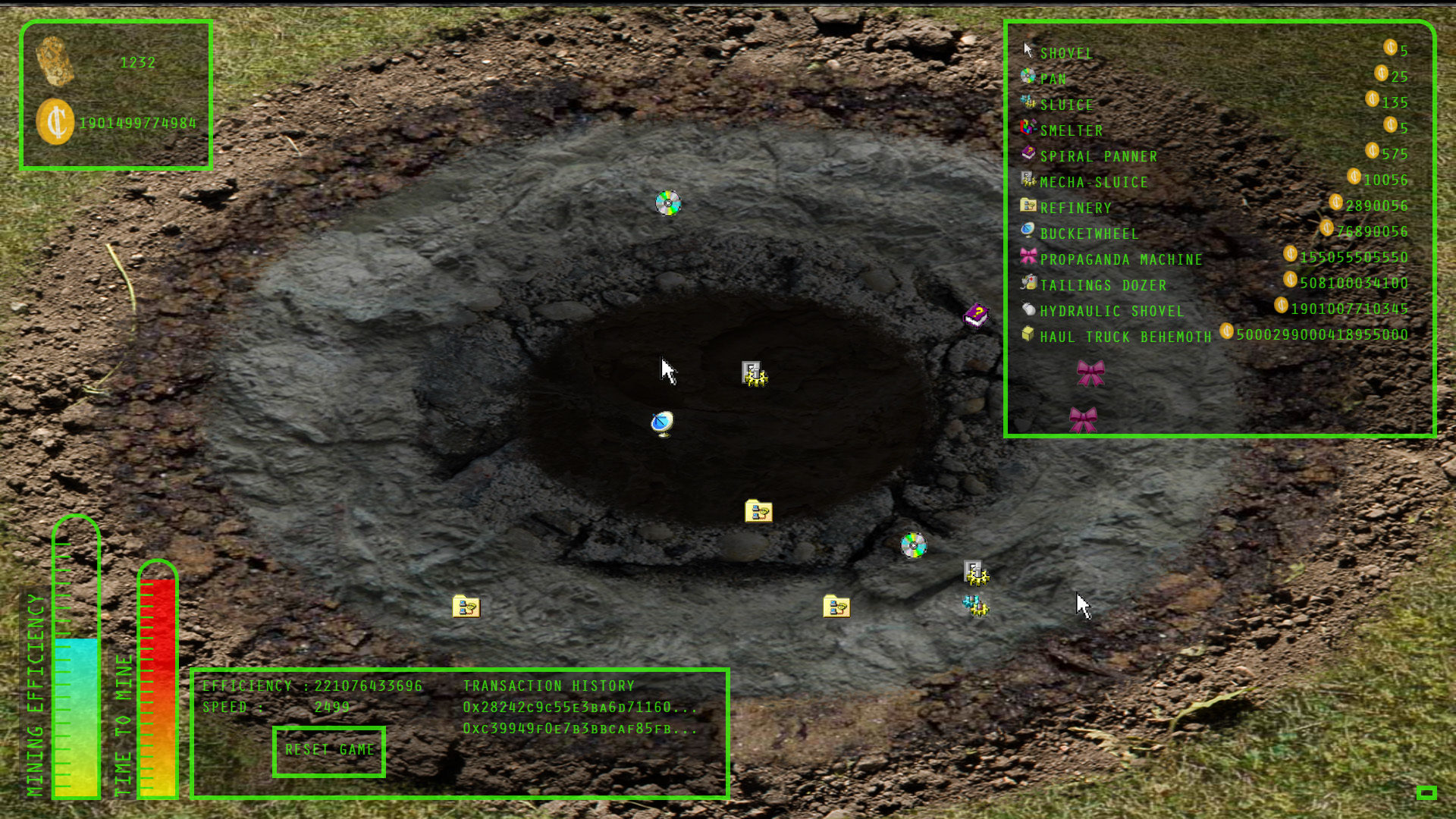 By making connections that need not be either utilitarian nor profitable, artists explore potential for diverse human interest and experience. Also, unlike on blockchains, where time moves inexorably forward (and only forward) – fixing the record of every transaction made by its users, into its time slot, in a steady pulse, one block at a time –  human imaginative curiosity can scoot, meander and cycle through time, inventing and testing, intuiting and conjuring, possible scenarios and complex future worlds. They allow us to inhabit, in our imaginations, new paradigms without unleashing actual untested havoc upon our bodies and societies. 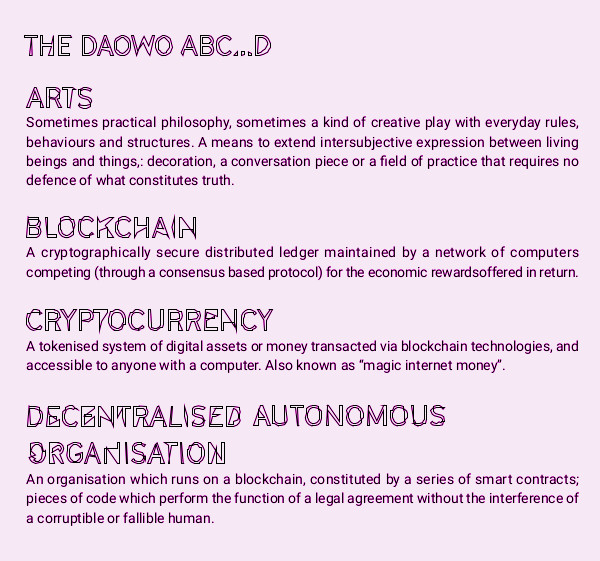 Art and the “Internet of Money”

Back in 2008 the global banking system was bailed out by governments with tax payers’ money. Meanwhile a 15 year explosion of web-inspired, decentralised, mutualist-anarchist DIWO (Do It With Others)-style cultural actions and practices ebbed (though its roots remain and go deep). The global network of human attention and resources were, by this time, well and truly re-centralised. The “big five” now owned, and often determined, our communication and expression. Post-Internet artists rejected platform-building as a social artform and instead, took as their materials, lives mediated through social media and corporate owned platforms.  Some dived into the marketing vortex, to revel and participate in the heightened commodification of art.

With the introduction of the blockchain protocol on the Internet we see a reversed direction of travel in the artworld, with major developments coming more quickly from the businesses of art, which reassert art’s primary status as an asset class, than from those artists experimenting with new forms of experience and expression enabled by its affordances. Now intermediaries of art world business are moving into blockchains (also sometimes called the “Internet of money”) with a focus on provenance, authentication, digital arts made scarce again with IP tracking, fractional ownership, securitisation and auction[note]See the Blockchain Art Stack Ready Reckoner, DAOWO Resource #1, page 19[/note]. It is blockchains for art, any art, as long as that art can be owned and commodified. This may be seen as a good thing, generating and distributing increased revenues to ‘starving artists’. Also perhaps inevitable, as that which cannot be owned is hard to represent on a blockchain ledger. 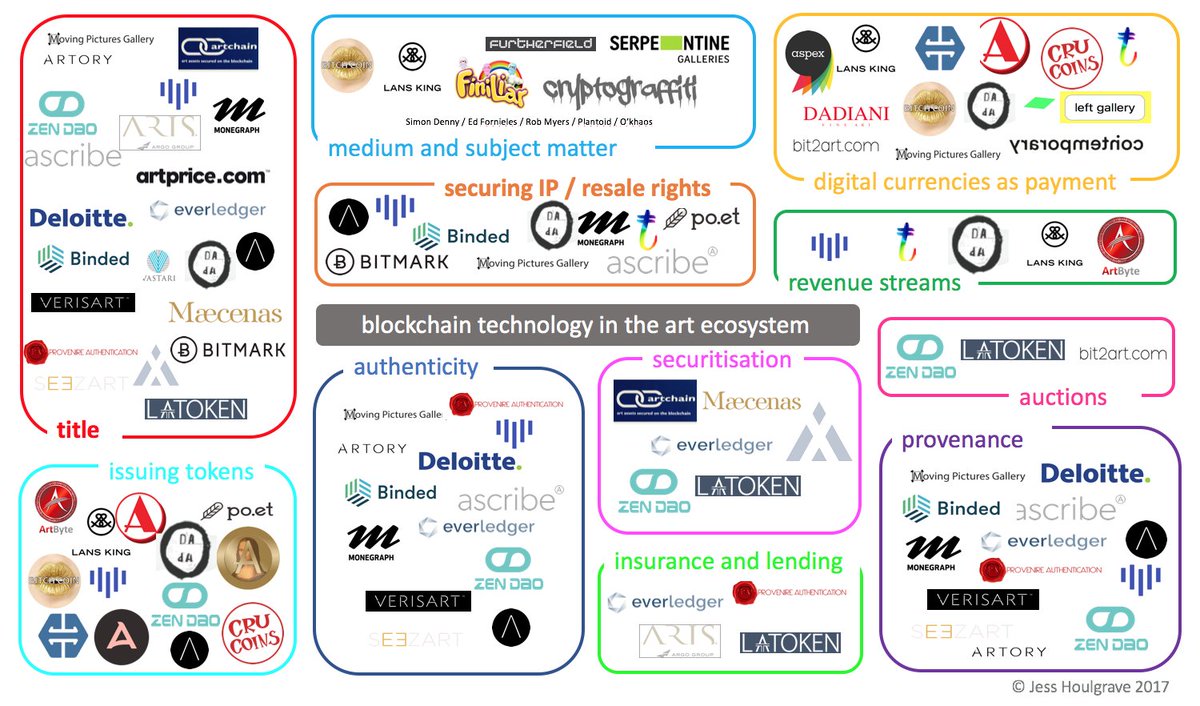 In his new book Reinventing democracy for the digital condition, (2018) Felix Stalder notes that people are increasingly actively (voluntarily and/or compulsorily) participating in the negotiation of social meaning through the “referentiality, communality, and algorithmicity, […] characteristic cultural forms of the digital condition”. In 2015 the Ethereum blockchain launched with a new layer that could run “smart contracts”, pieces of code which act as autonomous agents, performing the function of a legal agreement without the interference of a corruptible or fallible human[note]These technologies now underpin a range of post-currency developments, massive industrial and state investment for authentication of identity and matter, more efficient and secure financial transactions and distribution of digital assets; communications so secure as to facilitate voting; and as a coordinating technology for the billions of devices connected to the Internet.[/note]. These can be combined to perform as blockchain-based companies called Distributed Autonomous Organizations (DAOs) and there are a plethora of blockchain implementations and political agendas now developing. How these unfurl will affect our ability to relate to each other, to deliberate, decide and cooperate with each other as individuals, organisations and societies.

So for us the promise lies in platform-building: by-and-for communities of experimental artists (in the expanded sense of the word), participants and audiences who want to create not just saleable or tradeable art objects[note]For examples like Cryptopunks, Cryptokitties and Rare Pepes read Tokenization and its Discontents by Rob Myers, Furtherfield 2017[/note] but artworks that critique the relationship between art and money, and expand the contexts in which art is made and valued.

‘AltCoins, cryptotokens, smart contracts and DAOs [Digital Autonomous Organisations] are tools that artists can use to explore new ways of social organisation and artistic production. The ideology and technology of the blockchain and the materials of art history (especially the history of conceptual art) can provide useful resources for mutual experiment and critique’ – Rob Myers[note](Conceptual) Art, Cryptocurrency and Beyond by Rob Myers, Furtherfield 2014[/note]

While FairCoin (being rolled out by FairCoop with the Catalan Integral Cooperative) puts new forms of decentralised social organisation into practice on the ground, blockchain based art projects such as Terra0 and Plantoid by O’khaos offer examples of governance systems and invite us to critically “imagine a world in which responsibility for many aspects of life (reproduction, decision-making, organisation, nurture, stewardship) are mechanised and automated.”[note]Both featured in the exhibition NEW WORLD ORDER, currently touring as part of the State Machines programme to Aksioma in Slovenia and Drugo More in Croatia[/note] Both artworks demonstrate functioning systems and help us to think through how we might determine and distribute artistic (and other) resources, their value, and the rules for their co-governance for the kinds of freedoms, commonalities and affiliations that are important for the arts. 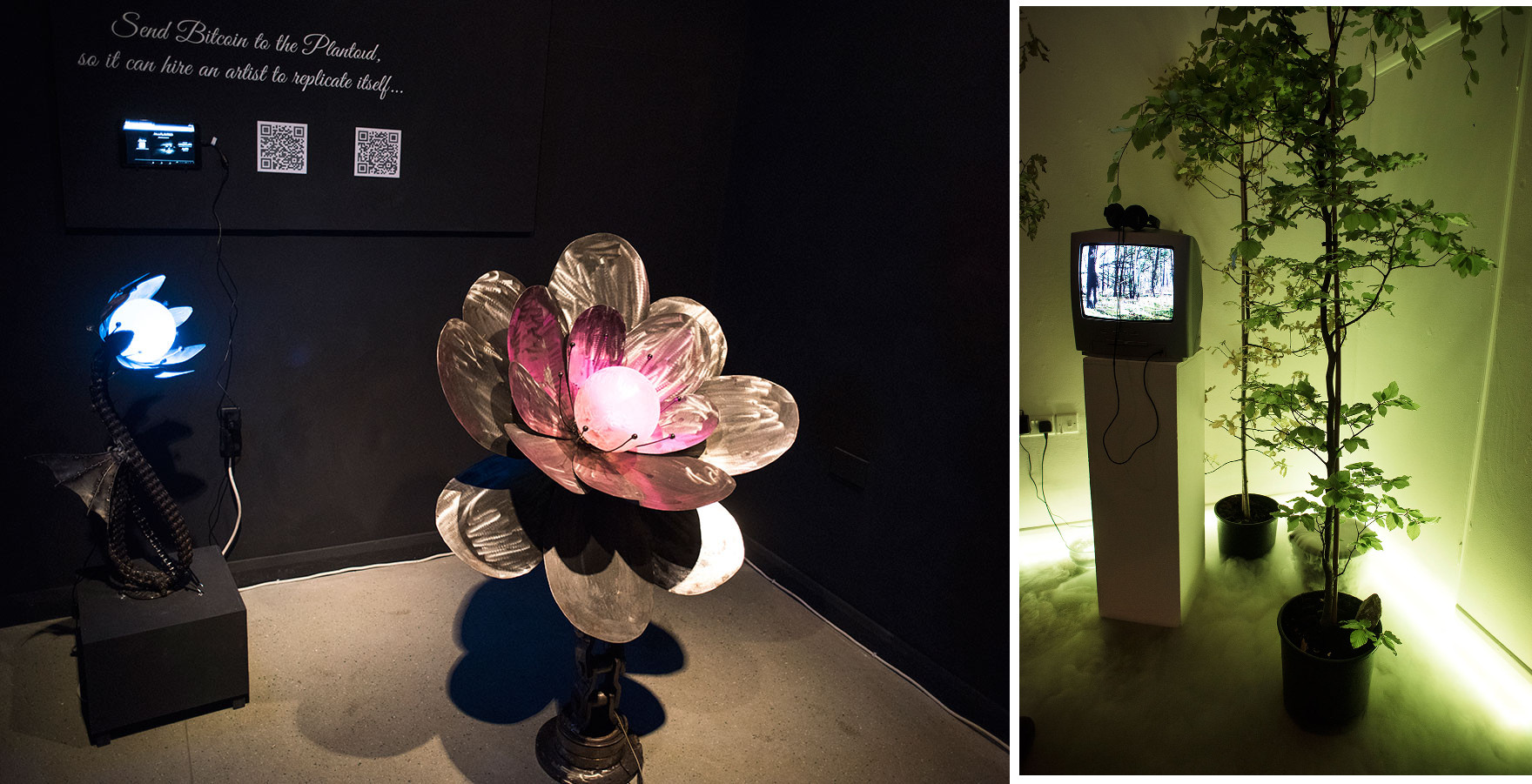 It may take a while. What to value and how to value it is a particularly tangled question. The technical infrastructure of the blockchain is at the stage of development that the Web was at in the early 90s (blockchain technologies are less forgiving, require deeper programming knowledge and are therefore more expensive to build than web pages or platforms) which, along with the get-rich-quick vibe of non-community-platform projects, might be why there are still so few community platforms actually in operation. Resonate.is the cooperatively owned music streaming service is an inspiration in this regard. It is a platform for musicians – creators and listeners – that opens up the governance of its resources to everyone who has ever created or listened to its music. It demonstrates one way in which a DIWO ethos might work.

Helen Kaplinsky is exploring how to bootstrap to the blockchain, Maurice Carlin’s Temporary Custodians project which realises an alternative system of peer2peer art ownership and stewardship at Islington Mill[note]See An Alternative to a Historical Mode of Art Ownership, Helen Kaplinsky in DAOWO Resource #1, page 6, Furtherfield, 2018[/note].

Three preoccupations dominate 2018 New Year blogs and commentary that mark the blockchain’s 10th anniversary: blockchains as cash cults; doubts about the actual utility of blockchains and; the environmental impact of Bitcoin (still, erroneously interchangeable with the blockchain in the minds of lots of people). We add to these our concern about the intensification of control enabled by these infrastructures, AND the simultaneous conviction (shaped by deep collaborations and hard criticisms over the last years) that blockchains have the potential to enable and stimulate new forms of social organisation, resource distribution and collaboration in the arts.

The first two preoccupations match exactly the commentary surrounding the early days of the Web and we know how that turned out. The remaining concerns are grist to the mill of our ongoing programme of publications, films, exhibitions and events. The technologies are only now stabilising to allow more grass-roots infrastructural developments.

We invite you to bring your own lens of constructive critique, gather a crowd to debate and explore how we might pull blockchains into art, on the arts’ own terms, and to gain an understanding of why it is worthwhile.

If you’re interested in our critical art and blockchain programmes with various individuals, groups and partners since 2015 check out the Furtherfield Art and Blockchain resource. You could check out how it all started, watch our short film, read this book, visit this exhibition, or archives and documents of previous exhibitions[note]The Human Face of Cryptoeconomies[/note], [note]New World Order[/note], read reviews and debate, and join us at our ongoing DAOWO blockchain lab series, devised with Ben Vickers (Serpentine Galleries) in collaboration with the Goethe-Institut London, and the State Machines programme[note] Its title is inspired by a paper written by artist, hacker and writer Rob Myers called DAOWO – Decentralised Autonomous Organisation With Others.[/note] 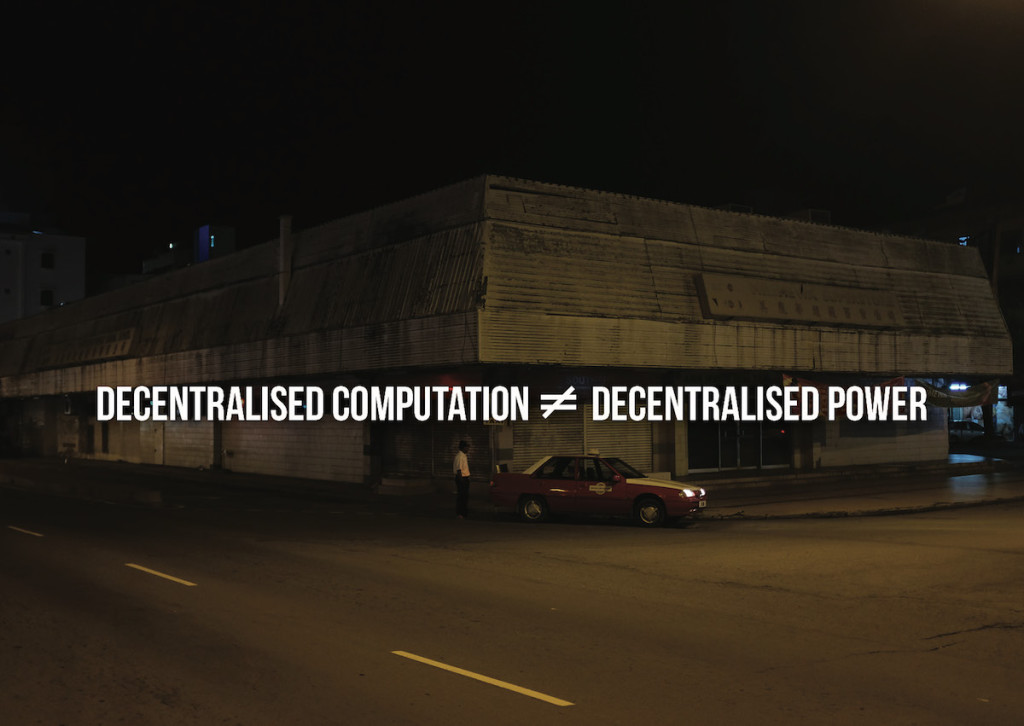